Moscow-born property whizz Alisa Zotimova looks remarkably calm for an entrepreneur who specialises in buying London properties for wealthy Russians. Has no one told her Vladimir Putin’s regime isn’t top of Britain’s Christmas card list at the moment? Or that Prime Minister Theresa May is proposing a new levy on foreign property buyers? The UK isn’t perhaps the welcoming market it once was.

The founder of AZ Real Estate, which advises on commercial and residential sales and leases, relaxes in a chair in her Mayfair office. 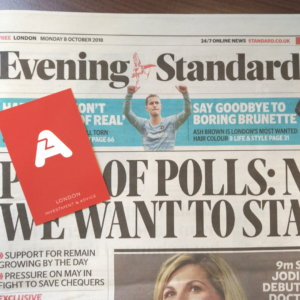 She taps her foot and says: “While there has been some initial hesitation, don’t believe for one second that political tensions will substantially get in the way of property deals.”

The glamorous chief executive’s confidence comes despite relations between the UK and Russia reaching boiling point in recent months after the Salisbury poisonings, and Britain’s urging the EU to increase sanctions against Russia.

Zotimova says: “London remains a safe haven for investors, with strong rental income and tenant demand for assets. There are good, law-abiding and tax-paying Russians out there in abundance. I have, and will, continue to help them to buy buildings in England.”

She has made several trips to her native land this year, and says demand for London properties above £50 million has slimmed of late, but there are plenty of buyers looking to invest up to £5 million each time. AZ Real Estate takes a commission of between 1% and 2%.

Even if requirements from Russian clients were to quieten, 38-year-old Zotimova has plenty of other work to keep her busy. AZ Real Estate, which she founded in 2012, has a number of UK and eastern European customers, and the firm is eyeing building its own developments for the first time. 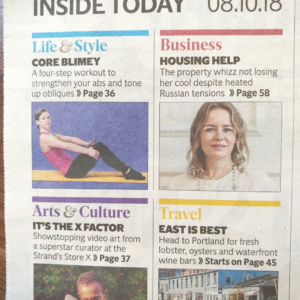 Says Zotimova: “I feel my business has steadily grown, attracting smaller customers that like a niche and personal middleman to advise on deals rather than some of the larger estate agents that have hundreds of buyers on the go.”

Her move into the property industry was unconventional. The economics graduate chuckles as she recalls managing a restaurant after her studies — some of which took place in America — in her hometown of Krasnogorsk in western Moscow.

Agency giant JLL had an office above the restaurant and its staff were regular customers. “I got friendly with them and they were impressed with my English. Just before I was about to leave for a new job, they invited me to train with them as a surveyor.”

Zotimova spent two years with JLL before being poached by rival Cushman & Wakefield. “There was loads of work if you were hungry for it. The Russian market was still in its infancy because previously, under the Soviet Union, all buildings belonged to the state. Once it dissolved, investors couldn’t wait to start buying,” she says.

The move to London came in 2007 to help some customers invest in UK property. “I wanted to work in a bigger market and live in a new city. I was a big earner for the firm,” Zotimova says in an animated tone before swinging her arms for a mini victory dance. 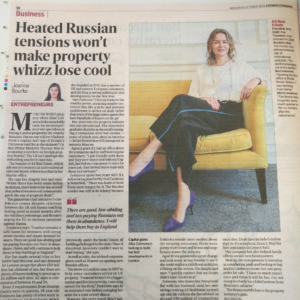 However, the party mood didn’t last. Zotimova sounds more sombre about the ensuing recession: there were plenty of job losses and bonus and wage freezes across the industry.

Aged 30 she pondered a career change and took some acting lessons to see if she could realise a childhood ambition of being on the screen. She laughs and says: “I quickly realised that my future didn’t have Oscars in it.”

Zotimova, who shares her Hampstead flat with her husband, used her own savings to set up AZ Real Estate six years ago and she reckons she has advised on around £30 million of transactions since then.

The drama world’s loss is the property industry’s gain.

Best moment: “Opening my first office in Brook Street. Before, I was working from home.”

Worst moment: “The Brexit vote. Enquiries were much quieter in the six months after the referendum.”