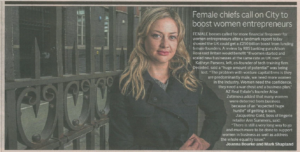 Female bosses called for more financial firepower for women entrepreneurs after a landmark report on Friday showed the UK could get a £250 billion boost from funding female founders.

A review by RBS banking guru Alison Rose said Britain would benefit “if women started and scaled new businesses at the same rate as UK men”.

Kathryn Parsons, co-founder of tech training firm Decoded, said a “huge amount of potential” was being lost. “The problem with venture capital firms is they are predominantly male, we need more women in the industry. Women need the confidence, they need a war chest and a business plan.”

AZ Real Estate’s founder Alisa Zotimova added that many women were deterred from business because of an “expected huge hurdle” of getting a loan.

Jacqueline Gold, boss of lingerie retailer Ann Summers, said: “There is still a very long way to go and much more to be done to support women in business as well as address the whole equality issue.” She added: “For me this is also about education in schools, and boys and girls being brought up as equals.”

Deborah Frost, chief executive of Personal Group Holdings, a provider of employee services in the UK, said: “I’m one of only sixteen female CEOs at AIM-listed companies. It’s obvious that we still have a long way to go to level the playing field for women in business and I think the report does a good job of highlighting our most pressing challenges – whether that’s access to capital, investor confidence, or female role models to emulate.”