What’s changed for Russians in London? 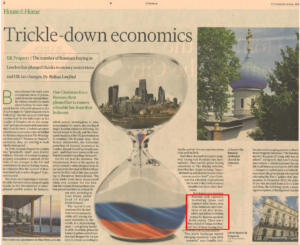 Boris Johnson has used some contentious turns of phrase. Aside from the extraordinarily witless remarks he made about burkas, he once compared female volleyball players in the 2012 Olympics to “glistening wet otters frolicking”. But his claim in 2014 that London was “to the billionaire as the jungles of Sumatra are to the orangutan” perhaps demonstrated more foresight than he knew. London’s property market was once such a natural habitat for Russian oligarchs that The Washington Post called it “Moscow on Thames”; nowadays, they are starting to look wholly endangered.

By 2016, Russian demand in London was “practically dead”, says Dmitry Zakirov, director of Russian language property consultants LonGrad. In the wake of tax changes in the UK and restrictions on money leaving Russia, he estimates that the number of Russians buying in London dropped 75 per cent in a year.

Numbers were beginning to recover, he adds, but have since slumped again thanks to the introduction of unexplained wealth orders in January, which permit investigators to seize unaccounted for assets, the souring of Anglo-Russian relations following the Skripal attack in March, and the subsequent decision of the UK government to re-examine 700 Russian visas. Even Roman Abramovich, the billionaire posterboy of Russian investment in London, has got himself an Israeli passport— and there were rumours this year that he’s considering selling Chelsea FC, which the club denies.

But it’s not just the Russians. The international share of the market in prime central London dropped from 52 per cent in the first half of 2014 to 39 per cent in the first half of this year, according to Hamptons International. The drop looks even more pronounced when you account for the fact that the volume of transactions over that period has fallen by at least 30 per cent, according to Liam Bailey, global head of Knight Frank Research. 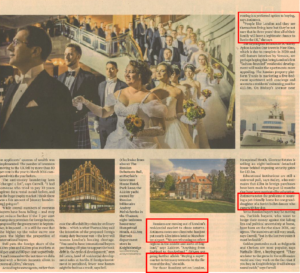 The appeal is not sweetened by the fact that London property, while still among the most expensive in the world, is a depreciating asset — and getting harder to shift. As of July, prices for homes in prime central London had dropped by 3.8 per cent in a year, according to Savills, and are 18.4 per cent down from their peak in 2014.

Back then, demand for London property among rich Russians was stratospheric. Thea Carroll, senior buying consultant at The Buying Solution, describes her clients as being “hyper-demanding and glamorous and ridiculous on another level”. One Christmas Eve a Russian client phoned her to ask if she could remove a bumble bee from their bedroom.

Developers were targeting Russians with expensive marketing plans and regional sales shows, says Alisa Zotimova, chief executive of AZ Real Estate, which specialises in finding homes for Russian speakers in the capital. There was a flow not just of “mega-rich Russians” but of those buying properties from £2m up, says Zakirov.

“The whole landscape started changing massively from 2014 onwards,” says Camilla Dell, founder and managing partner at Black Brick Property Solutions. “The Russian market dropped off along with lots of others”. Along with that year’s stamp duty reform — which increased the tax bill on all homes priced above £937,500 — changes to capital gains and inheritance taxes, the government also started reforming the Tier 1 “golden visa” programme. In November 2014, the price of the visa doubled from £1m to £2m and then, the following April, a more rigorous system of background checks on applicants’ sources of wealth was implemented. The number of investors moving to the UK fell by more than 80 per cent in the year to March 2016 compared with the year before.

The anti-money laundering laws “changed a lot”, says Carroll. “I had someone who tried to pay 10 years upfront for a rental in cash before, and in the huge trophy market I think there was a fair amount of [money laundering] going on”.

While overall numbers of overseas buyers have been falling — and may yet reduce further if the 3 per cent stamp duty premium for foreign buyers, proposed by the government in September, is imposed — it is still the case that the higher up the value curve one goes, the higher the proportion of international buyers.

Dell puts the foreign share of the £10m-plus and £20m-plus markets at 60 per cent and 80 per cent respectively. “I can’t remember the last time we did a deal with a British domestic client in excess of £20m,” she says.

According to some agents, rather than ease the affordability crisis for ordinary Brits — which is what Theresa May said the intention of the proposed foreign stamp duty increase was — the levy will worsen London’s housing shortage. “You need to have international buyers purchasing off-plan to support the bank debt in the cycle of development,” says Ed Lewis, head of residential development sales at Savills. If foreign investment is penalised, fewer new homes might be built as a result, says Dell.

Russians are moving out of London’s residential market to chase returns. Zotimova notes one client who has just put nearly £5m into a hotel at Manchester airport. “We are refocusing on other regions in the middle and north of England,” says Zakirov. “Anything from Bedford to Sunderland.” Others are going further afield: “Buying a supermarket in Germany seems to be the flavour of the day,” she adds.

For those Russians set on London, renting is a preferred option to buying, says Zotimova.

“People like London and they see themselves living here but they’re not sure that in three years’ time all of their family will have a legitimate chance to live in the UK,” she says.

The developers behind the 50-storey Aykon London One tower in Nine Elms, which is due to complete in 2020 and will feature interiors by Versace, are perhaps hoping that being London’s first “fashion-branded” residential development will make the apartments more appealing. The Russian property platform Tranio is marketing a five-bedroom apartment with concierge and access to a residents’ swimming pool for £13.5m. On Bishop’s Avenue near Hampstead Heath, Glentree Estates is selling an eight-bedroom detached house behind imposing security gates for £12.5m.

Educational institutions are still a universal pull, says Bailey, who estimates that £2bn in foreign purchases have been made in the past 12 months that have been motivated by education. Zotimova notes the problems of sourcing a pet-friendly home for one granddaughter of a Soviet ballet dancer who came with her dog.

Yet as Russian buyers may be moving on, Turkish buyers, who want to hedge their money against the falling lira and political uncertainty at home, have been on the rise since 2016, say agents. The numbers are still very small, says Carroll, “but in the last two years it must be double”.

Golden postcodes such as Belgravia and Chelsea are most popular, says Nathalie Hirst, a buying agent. “They are later to the game in the millionaire world and they work on the fact that if you buy in Knightsbridge it will always sound swish,” says Carroll.

Of the £4.4bn-worth of UK property bought with “suspicious wealth”, £4.2bn is in London, and a fifth is bought by Russians, according to a report last year by Transparency International UK, writes Hugo Cox. The majority flows through shell companies — foreign firms own roughly 40,000 London properties this way.

“Corrupt individuals [need] a getaway vehicle and a safe place to stash their stolen loot. Anonymous companies are the getaway vehicle and UK assets, such as property, are the safety deposit box,” says Duncan Hames of the organisation. Transparency campaigners are not the only ones sounding the alarm. In its annual report in May, the National Crime Agency (NCA) singled out London’s property market as a target for laundered money from Russia, Nigeria and Pakistan. Since the poisoning of the former Russian double agent Sergei Skripal and his daughter Yulia in Salisbury in March “ministers have spoken with renewed vigour about creating a hostile environment for dirty money”, says Hames.

The UK introduced a public register of companies in 2016 and has committed to introducing a register of the beneficial owners of overseas companies that hold UK property. But checks on the accuracy of the register, maintained by Companies House, are limited. The only person to have been convicted for faking records was Kevin Brewer, a businessmen who set out to demonstrate how easy it was to do so (one firm he created, Cleverly Clogs Ltd, included the government minister responsible for Companies House as a director).

“Unlike David Cameron, I just don’t think Theresa May is that interested,” says Oliver Bullough, author of Moneyland: Why Thieves and Crooks Now Rule the World and How to Take It Back. “Rich Russians deserting London property has much more to do with the fact that the value of the rouble has tanked.”

Link to the original article