LonRes has just published the London residential review. Most anticipated news include Bitcoin payments, increased use of “proptech” – term used for all innovations in the property market and damaging effect on both sales and lettings that stamp duty land tax and the uncertainty over Brexit has on Prime London.

It is evident that due to increased costs and market conditions such as the uncertainty of Brexit are impacting the prime areas in London in several different ways.

People are moving less often, do more viewings; hence a property stays longer on the market.

The number of properties sold fell by 3.6% across the prime areas, with homes under £2 million being more exposed to pressure due to increased costs and changes to taxation.

The market experienced significant price drops in the prime areas with 2017 ending in 1% down year-on-year and values achieved in the fourth quarter down 2.1% on Q4 2016. As it’s hard to achieve the required price for the seller there is an increased rate of withdrawal with 62% of properties being taken of the market in Q4 2017. 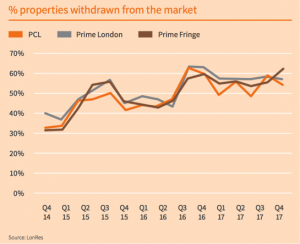 Although the uncertainty of Brexit seems to be the main impact on the property market, agents remain positive on the outlook for transactions in 2018. If you are on the look out for a property, now would be a great time to invest.

Unlike the Sales market, prime lettings improved in the second half of 2017. The LonRes Lettings Index in Prime central London increased by 3% on Q4 2016 following the increase in new tenants and leveled off stock. Overall the agents are optimistic about the activity within the rental market in 2018 expecting the number of properties let in 2018 to be higher than 2017. 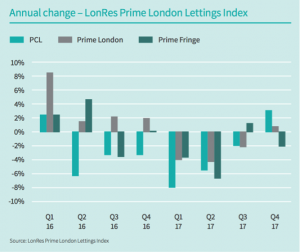 The market is still challenging particularly with the uncertainty over Brexit still looming large, but we hope it will recover in the near future.